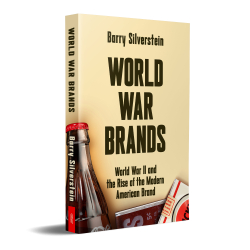 “Economic growth, product proliferation and television converged in the crucible of post-war America to create the fertile soil needed for modern brands to take root and bloom,” observes Barry Silverstein in this fascinating book. Exploring the interrelationship of World War II and American brands, Silverstein shows how the war itself was “branded,” how brand advertisers leveraged the war, and how the post-war economy helped birth the modern brand.

Included are scores of stories about some of the best-known brands of the ‘40s and ‘50s. This unique book takes a fresh look at the impact of World War II on America from a marketing perspective. History and brand buffs alike will be enthralled by WORLD WAR BRANDS!

The Buzz About WORLD WAR BRANDS

"WORLD WAR BRANDS is an entertaining and enlightening story of the beginning of disciplined marketing and advertising in America. The extent of Barry Silverstein’s research is incredible – he shares, displays, reports and comments on the many brands of the era. The treasure in the book is the pictorial collection of ads that were placed during the war, capturing the focus of America at that time. This book is well organized, easy to read and an informative, nostalgic journey through classic brands and World War II realities."
- Peter W. Evans, Retired Advertising Agency President

"This impressively researched and fascinating book reveals how brand destinies are shaped not only by culture and technology but by global events. From Ray-Ban aviator sunglasses and Donald Duck to Cocoa Puffs and Car Culture, Barry Silverstein explains how American brands responded to WWII and – despite its human toll – went on to create a vibrant post-war consumer society and lay the foundations of modern marketing."
- Barry Robertson, Partner, Boomer / neXt division of VizioNation, a generational marketing consultancy

"Anyone interested in American history and America’s most successful brands will find WORLD WAR BRANDS an enlightening read. Barry Silverstein does a great job summarizing how America was changing from 1920 through the 1960s and how America’s best-known brands evolved in response. This is a highly worthwhile read for the marketing or brand history enthusiast."
- Francis J. Kelly III, President and CEO, CEOVIEW Branding LLC

"…Silverstein is keenly aware of the centrality of branding to 20th-century advertising. Three dozen print-ad reproductions complement the book’s engaging writing style… Overall, it’s a convincing history about the role of World War II in developing brand consciousness among consumers in the United States."
- Kirkus Reviews

"The beauty of this book is that it awakens us to the seemingly invisible world we inhabit. We are so inured to advertisements, billboards, jingles, slogans and propaganda that we don’t notice how they slip seamlessly into our minds and decisions. Advertising affects the way we live, what choices we make, where we spend our money and how we mold our perceptions. After reading, “World War Brands” you may never look at your favorite brands in the same way. What do I think of this book? In the words of Tony the Tiger, a brand superstar, “It’s Gr-r-r-r-r-eat”!”
- 5 star review by Sherry Tuffin for Reedsy Discovery

PART III – The Birth of the Modern American Brand

Chapter 8: The Consumer in Post-War America
Chapter 9: The Era of Television
Chapter 10: The Modern Brand is Born

Afterword: The Brand Moves On